Sarah Bressler fell in love with growing food during an internship in urban farming her senior year of college. Now, she is the farm manager at the Hunger Task Force based out of Milwaukee, where she manages a 208-acre farm that provides half a million pounds of produce to its food bank each year.

The core labor force of The Farm is roughly 5,000 volunteers who pass through each season, and they, along with a full-time staff, grow about two dozen different fruits and vegetables, Bressler said.

The growing season is year-round, thanks to two hoop houses, also known as high tunnels, that allow them to grow crops during cold months. This is how urban farming combats food insecurity, even during Wisconsin winters.

“It’s a form of a greenhouse, but it’s in the fields,” she explained. “So it’s literally surrounding the growing space, so you’re actually still growing in the ground, but you have a structure around the growing space that has plastic wrapped on the top of it.” 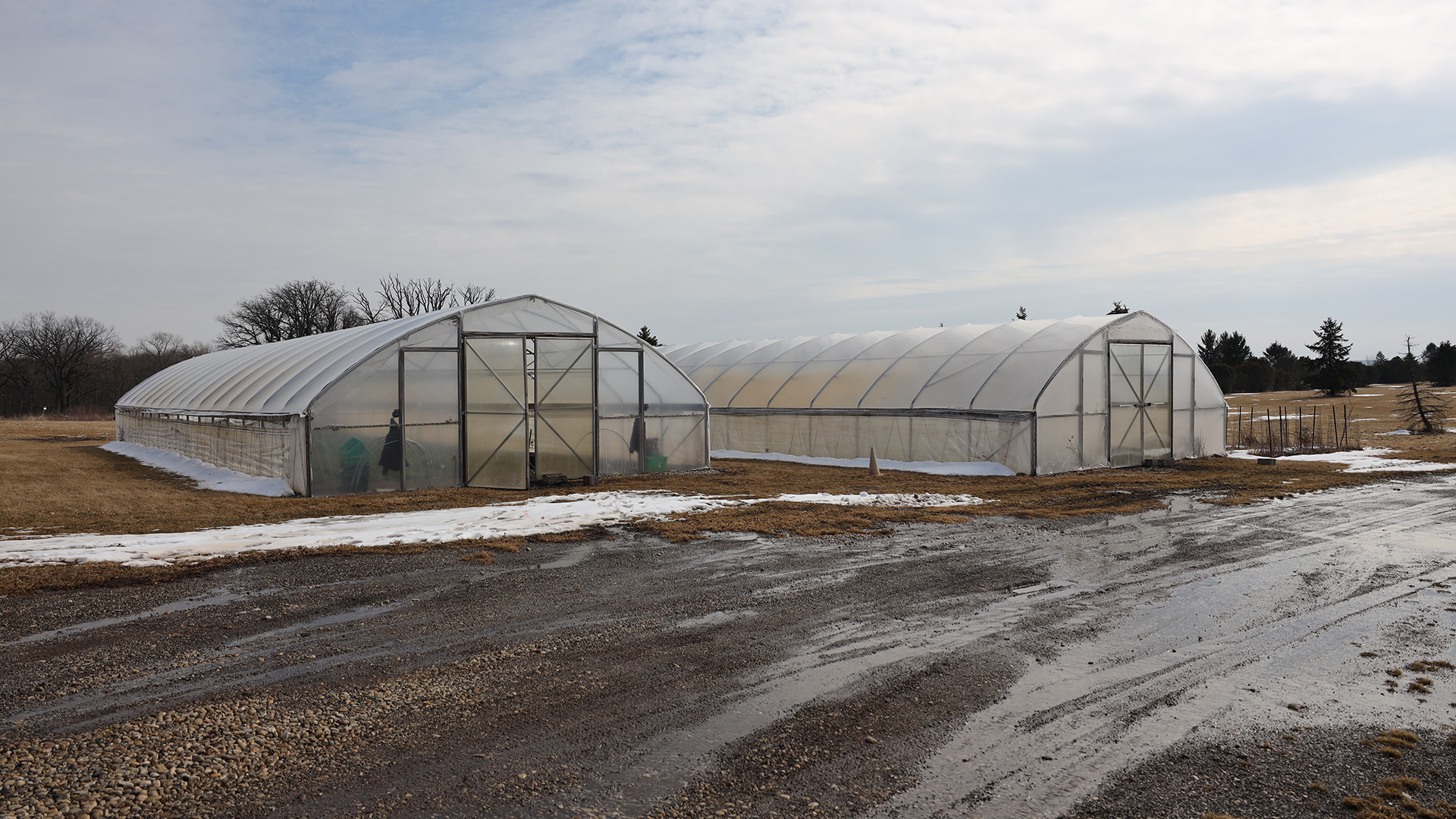 The Farm is part of a growing local food movement in Wisconsin aimed at supplying healthy, high-quality fruits, vegetables and meat — hearkening back to an earlier time when nearly all food was produced locally.

The movement includes farmers markets, urban farming initiatives, community supported agriculture and food banks that provide local produce and, increasingly, offer programs aimed at meeting the needs of the 1 in 12 Wisconsinites who are food insecure.

During a February visit to the hoop houses, the temperature was 32 degrees outside, but a steamy 80 degrees inside, providing the necessary climate for spinach, carrots, collard greens and mustard greens to grow. 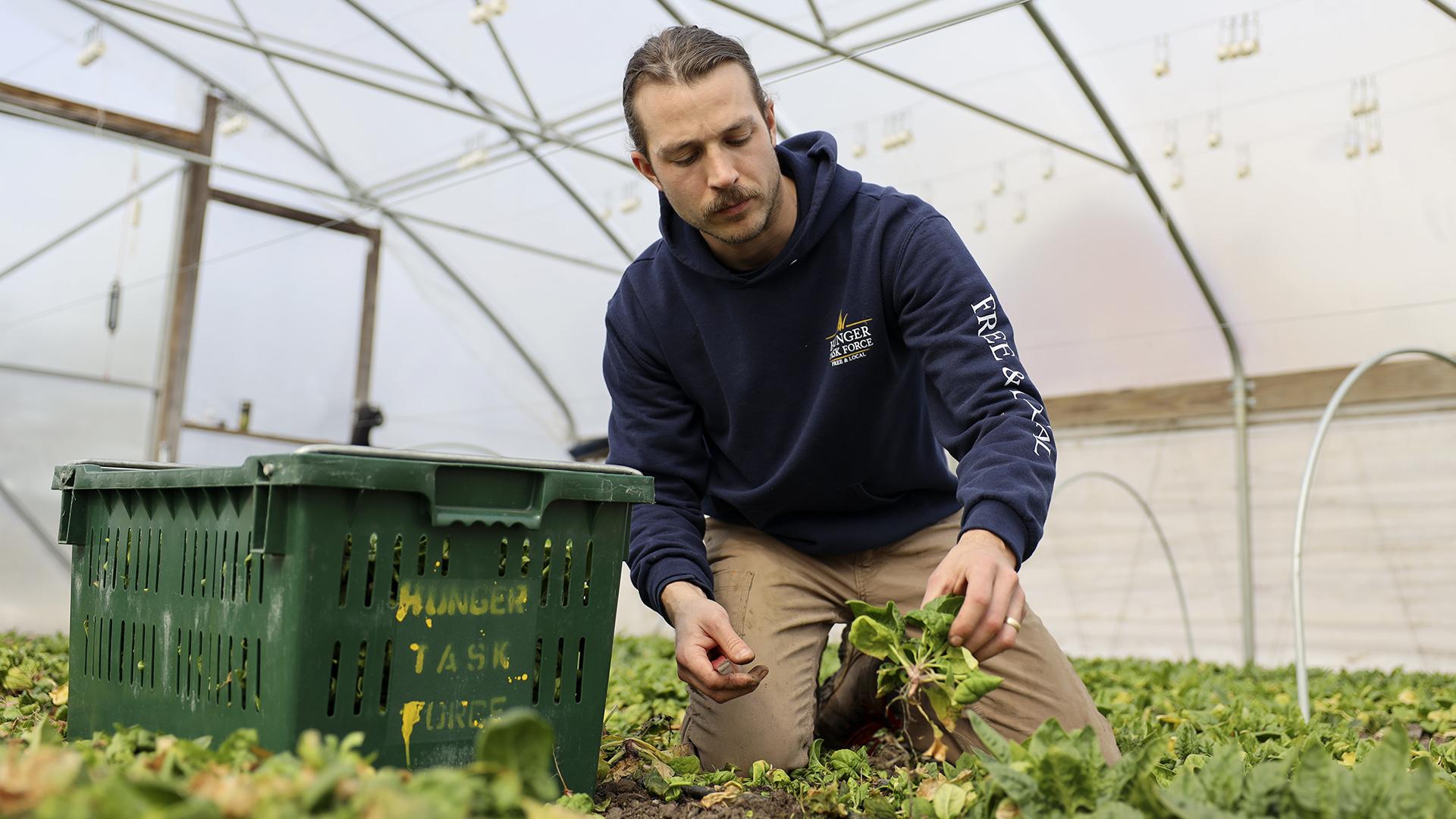 Jordan Leitner, farm volunteer coordinator, harvests spinach in one of the hoop houses at the Hunger Task Force Farm in Franklin on March 1, 2022. The Hunger Task Force leases the 208-acre farm from Milwaukee County Parks and provides fresh fruits and vegetables for free to children, families and seniors throughout Milwaukee. (Credit: Coburn Dukehart / Wisconsin Watch)

Still, the hoop houses are no replacement for the bounty of a summer harvest.

“It’s obviously a lot less,” explained Bressler, referring to the winter and early spring harvests, “but at the same time, we are still able to supply those fresh fruits and vegetables, and the hoop houses also give us an extension even in the spring.”

The Farm is about much more than giving people healthy food. It’s about changing habits and diet for a healthier life, especially for the 41% of Milwaukee children who live below the poverty line, Bressler said. 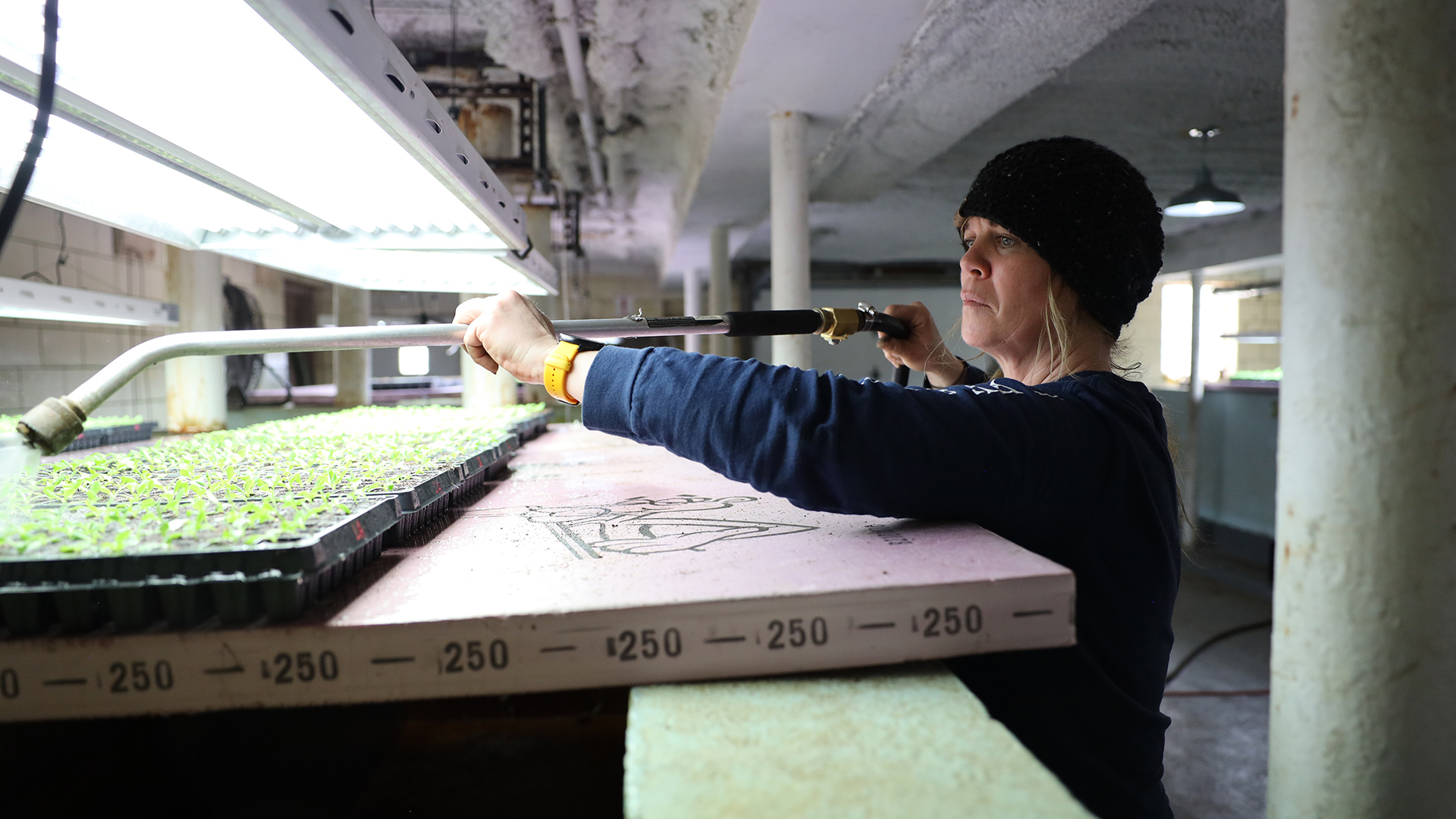 “Almost half of children don’t have enough to eat, let alone the right vitamins and minerals and nutrients that they need to grow and to use their brains in school,” she said.

“When they go to see a food pantry and they’re picking out their collard greens, they’re excited about leaving there and making something with them,” Bressler added. “There’s dignity there.”

Before the U.S. food system nationalized, people spent the summer and fall canning vegetables and stockpiling potatoes. Now large farms grow food year round in temperate climates like California’s Central Valley and ship it to grocery stores across the country.

Lydia Zepeda, a former University of Wisconsin-Madison professor and an expert on sustainable food movements, said most government agriculture policies do not support small, local farms, many of them passed down within families. This makes it unaffordable for almost anyone outside of large corporations to start a farm.

One movement pushing back against so-called factory farms is community supported agriculture, more commonly known as a CSA. It is a crop-sharing system in which the consumer takes on some of the farmer’s risk by buying produce or meat for a set price in advance of the harvest. This means that customers buy what’s available from the farmer – regardless of how well the growing season goes.

While there’s no official definition, CSAs generally involve farmers who deliver boxes of food or leave them at a central collection site on an agreed-upon schedule. Some weeks, those boxes could be full of tomatoes, while other weeks there could be other vegetables, depending on what’s ripe.

Organizations like Madison-based CSA FairShare Coalition connect local, organic farmers with consumers. Not everyone can afford organic CSAs, since they tend to be expensive, said Sarah Janes Ugoretz, the apprenticeship program coordinator for the nonprofit.

That’s why FairShare created the Partner Shares Program, which helps cover between 25% and 75% of the costs of joining a CSA each year by connecting low-income families with CSA farmers. The program allows someone who signs up for the program to get a 50% discount on the $600 cost per growing season for a standard share or the $400 cost of a small share.

Janes Ugoretz said households apply to be a part of the program and assess their own financial needs for the application. In 2022, 152 families were enrolled in the program, which receives grant funding for serving low-income families.

The push for produce

In pursuit of creating a culture of dignity surrounding food assistance, some food pantries and food banks have pushed to incorporate more produce into charitable food systems.

In 2021, the pantry received a $422,500 grant from the Inland Empire Community Foundation, a California-based nonprofit that provides grants to organizations working with vulnerable populations, said Helen Osborn-Senatus, director of operations for the pantry. With the grant, the organization bought produce from 35 local farmers, she said, spending roughly half of the nonprofit’s monthly budget on produce.

“Prior to COVID, money just wasn’t really spent on produce by most pantries or food banks, and now that’s a huge change,” Osborn-Senatus said.

Osborn-Senatus also works with Scott Williams, who owns the Mount Horeb farm Garden To Be. Williams is an aggregator, supplying the pantry with produce from another two dozen farms. The River also gets donations of excess corn, tomatoes and squash from area farmers and gardeners, she said. 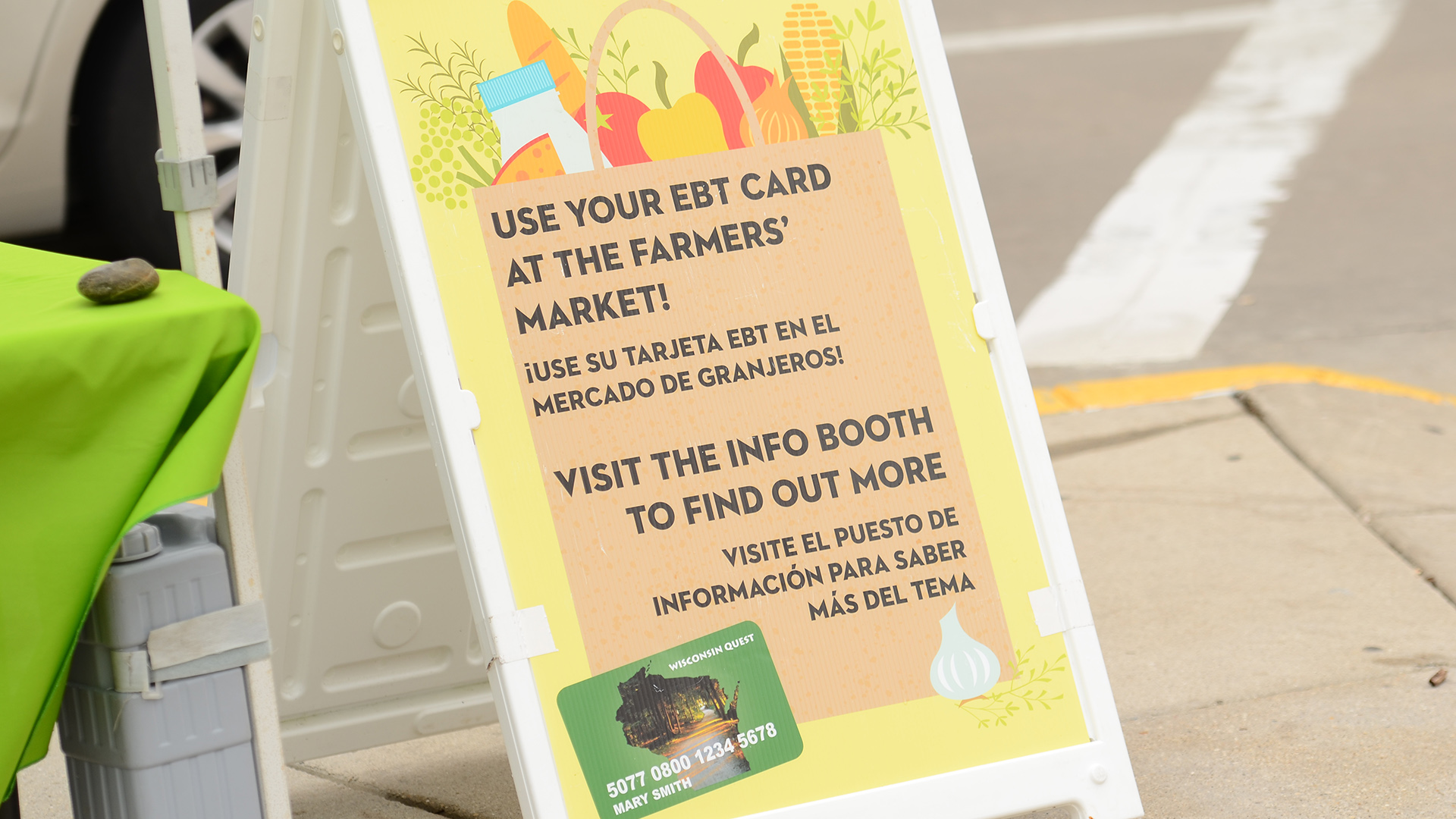 A sign at the Dane County Farmers’ Market information booth lets shoppers know they can use FoodShare cards to purchase items at the market in Madison on April 30, 2022. (Credit: Joey Prestley / Wisconsin Watch)

Chrissy Ramakrishnan, the food access coordinator for the Dane County Farmers’ Market, oversees that program and others, including the Double Dollars Program. A Madison and Dane County program, Double Dollars provides a money match of FoodShare funds used at the market up to $25 for users each time they attend a local summer farmers market.

Usage of the FoodShare card program and the Double Dollars program has increased significantly in the past year, Ramakrishnan said. In 2019, a total of $40,000 FoodShare dollars and Double Dollars were distributed, which dropped to $30,500 in 2020.

In 2021, however, more than $114,500 in FoodShare dollars and Double Dollars were distributed, she said. There were 1,371 program users attending the farmers markets in 2021 — and almost all of them were new users, Ramakrishnan said. 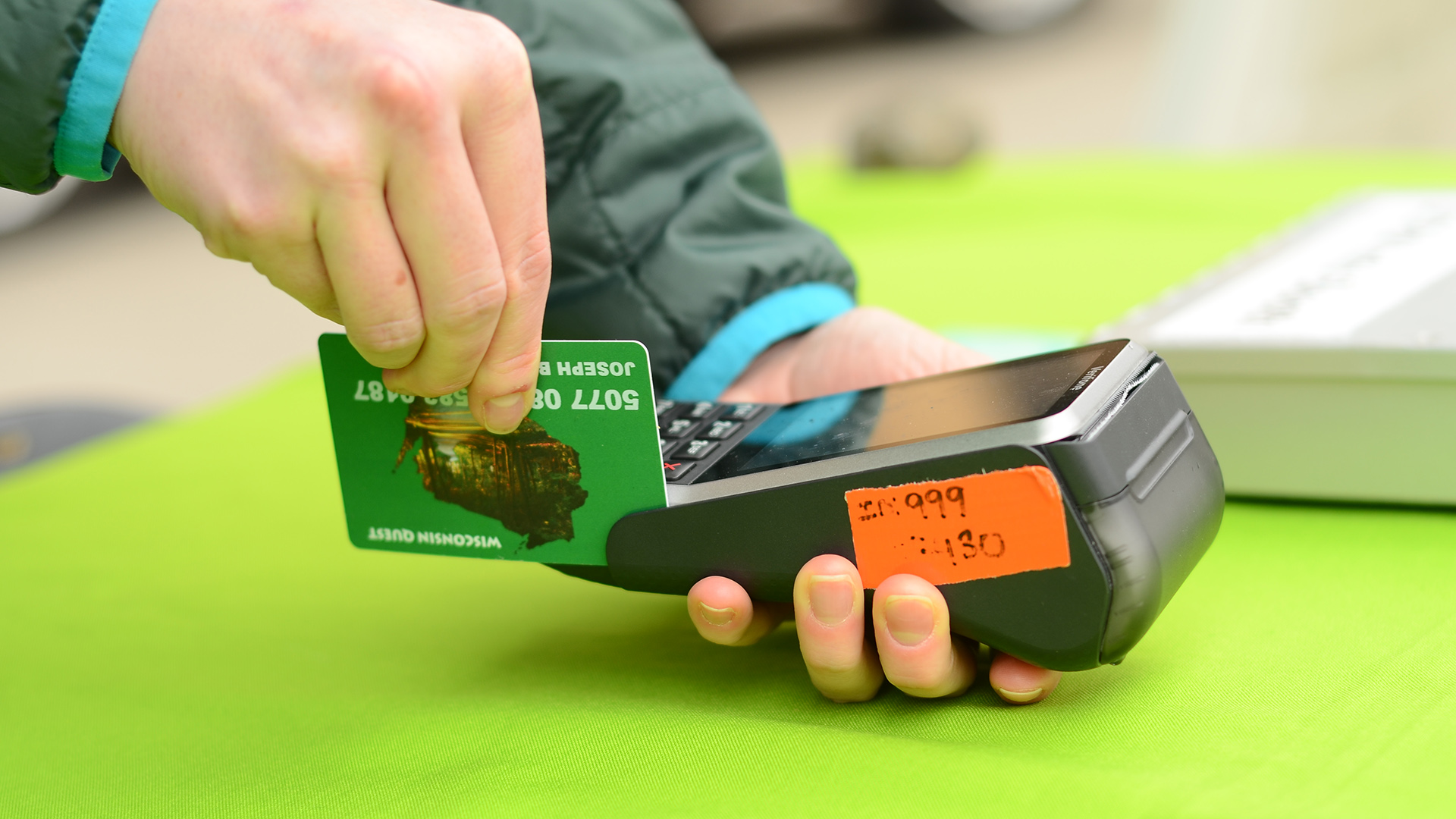 Julia Nagy, who volunteers at the Dane County Farmers’ Market information booth, swipes an EBT card to exchange FoodShare funds for market dollars which can be used to purchase items at the market in Madison on April 30, 2022. (Credit: Joey Prestley / Wisconsin Watch)

In addition to FoodShare, approximately 1,000 farmers participate in a statewide program that provides extra benefits to people receiving WIC (Women, Infant, and Children) benefits. One time per growing season, this program provides $30 checks to pregnant or postpartum parents and to children at least nine months old to be redeemed at local farmers markets.

The Senior Farmers Market Nutrition Program helps low-income seniors aged 60 or older purchase fresh produce from local farmers markets. Indigenous people can participate if they are over 55. The program issues checks worth $25 per participant per season.

“Everyone has the right to be involved within our food system,” Ramakrishnan said. “So whatever we can do to try to make that possible within the means that we have is so crucial and important.”

Zepeda said local food systems are an integral part of tackling food insecurity at a community and national level. She recommends that people vote with their dollars by buying from farmers markets. They can also ask lawmakers to support policy that supports small farmers, Zepeda said.

“The pandemic, if nothing else, has shown that food systems can be completely disrupted,” she said.

The nonprofit Wisconsin Watch collaborates with WPR, PBS Wisconsin, other news media and the University of Wisconsin-Madison School of Journalism and Mass Communication. All works created, published, posted or disseminated by Wisconsin Watch do not necessarily reflect the views or opinions of UW-Madison or any of its affiliates. 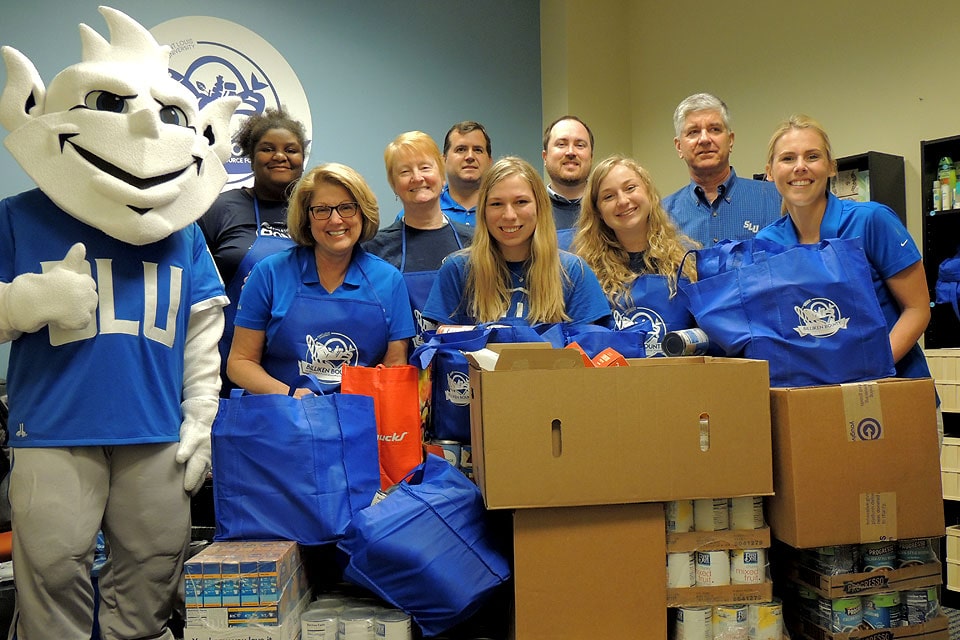 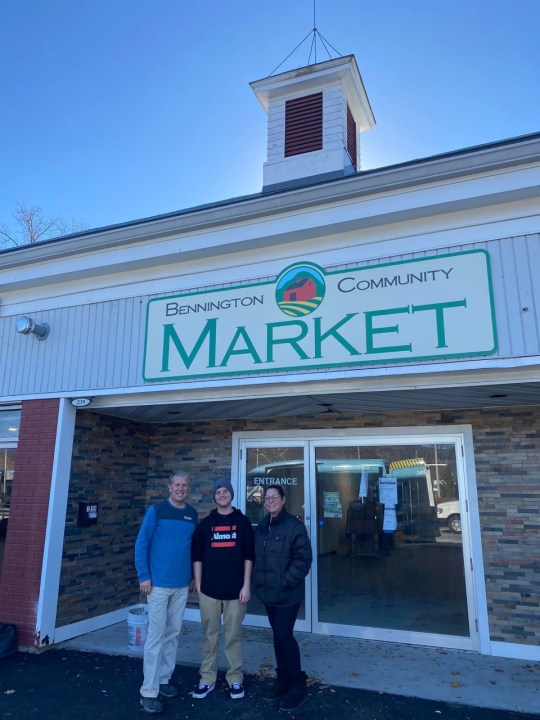