Watching viral videos of dalgona coffee — and creating my own version of the whipped beverage — broke me out of a coronavirus-induced slump.

Like many other people at the beginning of the pandemic, I suffered from increased anxiety and depression when the world shut down and the threat of COVID-19 overwhelmed me.

As a reporter suddenly thrown into covering the virus, I felt trapped in an endless cycle of reading and writing about it. My workdays bled into the nights and weekends as “doomscrolling” social media for news about coronavirus encroached on my life.

At my worst, I spent entire weekends snacking on junk food, binge-watching Disney princess films and sobbing in bed.

Then dalgona coffee went viral, and I had a new weekend treat to ease my depression.

Dalgona coffee — made by whipping instant coffee, sugar and hot water into a foam that’s served over milk — first entered the international limelight after South Korean actor Jung Il-woo was filmed tasting the drink at a cafe in Macau, China, and likened it to a toffee candy known as dalgona. The video clip, which aired in January 2020 on a South Korean reality food show, immediately sparked interest on YouTube. But according to The New York Times, Hannah Cho’s viral TikTok video in March, showing how to make dalgona coffee, launched it as the unofficial drink of quarantine.

Whipped coffee isn’t new, however. It has been made in India, Pakistan and Greece for years and is known by a variety of names. Pakistani Canadian food writer Sarah Mir of Flour and Spice Blog wrote of her experience hand-whipping batch after batch of phitti hui coffee during a World Cup viewing party in 2002.

She recalled pulling her fourth tray of cookies out of the oven after perpetually whipping coffee, two at time, when her brother decided to reprieve her.

“He loudly announced that everyone was done having coffee and cookies so that I could sit down and watch the game,” Mir wrote. “I don’t think my father was impressed, but I was quite relieved.”

No matter what the drink’s origins, Cho’s TikTok post seemed to breathe new life into the frothy coffee. The buzz arose just months after Fleetwood Mac’s 1977 hit single “Dreams” landed back on the charts after another viral TikTok video, in which factory worker Nathan Apodaca blithely lip-syncs to the song while skateboarding to work.

For me, last year’s newly popular, fluffed-up, tan mixture of coffee-crowning glass full of white milk was intriguing with its beautiful ombré layers. Coffee shops remained closed at the time, so despite the labor involved, I needed to make my own.

Watching the mixture of cane sugar, instant coffee and hot water bubble up into foam in my kitchen soothed my weary eyes after days spent staring into my computer screen. One down side: As much as I loved the flavor and experience of dalgona coffee, I hated scrubbing the sticky mess afterward.

Dalgona coffee evolved into the fun sidekick to my weekend brunch adventures of baking waffles. Aside from the simple milk-and-coffee version, I also experimented with the newly rich trove of recipes online that included honey, chai, mocha and caramel.

I grew more restless, though, as the pandemic inched on and my depression crawled back, so I busied myself by developing new variations to recover from the monotonous workweek.

Inspiration came after purchasing an adorable 3-D cookie from Mug Buddy Cookies — shaped like a pint of blueberries — to sit on the rim of the drink. The next step in my journey: the blueberry dalgona coffee. Soon, I was mesmerized watching the purple hue of a cup of blueberries stain the cane sugar and water as they simmered on the stove.

Sipping on a blueberry dalgona is a throwback to the strawberry milk I used to drink with my fried pastries at Dunkin’ Donuts as a kid. It has the nostalgia factor I need to reboot after a long week of working from home.

The promise of a blueberry dalgona coffee energized me and brightened my day, giving me a reason to get out of bed, even as the pandemic continued to loom. Now, my husband and I now walk around our neighborhood daily, and we mostly avoid binge-watching Netflix on the weekends.

Dalgona coffee works as a canvas for so many different flavor profiles, but as blueberry season fast approaches, it is this version I’m most eager to return to.

Make the syrup: Add the blueberries, cane sugar and water to a sauce pot over medium heat. When the mixture starts to boil, reduce heat to low and simmer for 15 minutes, stirring occasionally. Turn off the burner and let the mixture cool, then pour the syrup through a fine mesh strainer into a jar with a lid, and store in the refrigerator until ready to use.

Make the dalgona coffee: Combine coffee, sugar and boiling water in a mixing bowl, then whip together either by hand or with an electric mixer for 4 minutes or until stiff peaks form. In a carafe, stir blueberry syrup into milk, then pour mixture evenly into each glass before adding a scoop of ice. Gently layer whipped coffee on top of the milk, garnish with fresh blueberries and enjoy!

Note: I like to garnish my blueberry dalgona coffees with 3-D cookies that look like a blueberry pint, ordered from Mug Buddy Cookies. The adorable pastry has a cutout to perfectly hug the side of a coffee cup, and the tiny blue sprinkles complement the purple hue of the milk and blueberry garnish.

This recipe by Lauren J. Mapp first appeared on her personal food, beverage and travel blog at www.offthemappblog.com. Follow her on Instagram @sdredsoxgirl. 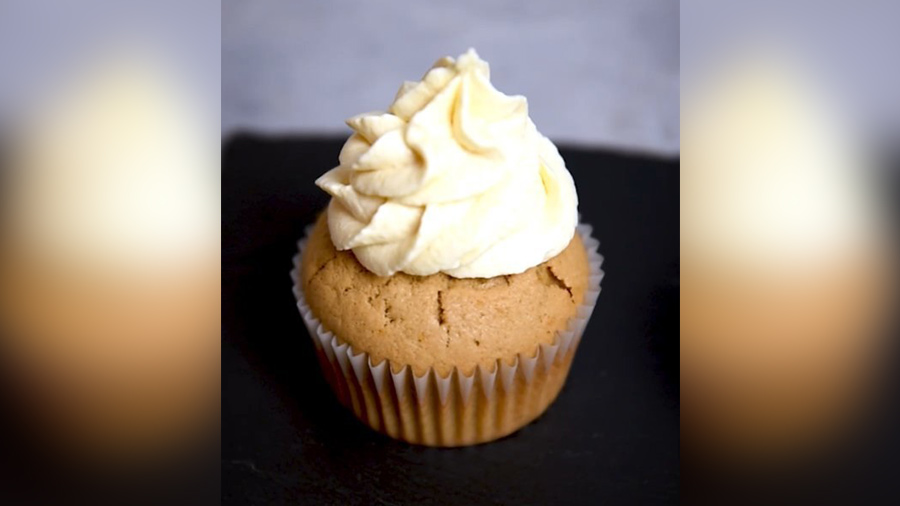