It seems simple enough: To lose weight, you should eat fewer calories than you burn. Yet many people mistakenly think that they need to cut out entire food groups, deprive themselves of their favorite foods or overhaul their entire diet to shed unwanted pounds.

Wouldn’t it be great if substituting healthier, lower-calorie foods or eating a smarter portion size can do the trick? Good news: It can.

As a nutritionist who has counseled thousands of clients, I found that teaching people to make healthy — yet simple — swaps is far more effective for the long haul than prescribing a rigid diet. Approaching weight loss from a place of deprivation tends to backfire, whereas creating small shifts, which you can easily implement, lends itself toward creating a healthier lifestyle and a healthier relationship with food.

Weight loss should not have to turn your life upside down. Swapping a food for a healthier, lower-calorie choice while remaining true to your portion size is one of the easiest ways to supercharge your weight loss and your health.

Food swaps can reduce the calories you consume.

Recommending healthy food swaps to online shoppers may reduce the number of calories they buy, according to a British study. The study evaluated a campaign to get families to switch to lower-sugar and lower-fat foods and beverages through smart swaps. It found that 32% of people switched to lower-sugar drinks and 58% swapped to lower-fat dairy options.

Making healthy beverage swaps, such as drinking water instead of soda, can also lead to weight loss, as well as a lower risk of diabetes. Eating whole grains instead of refined grains has been shown to improve blood cholesterol levels and decrease percent body fat in postmenopausal women.

Size swaps: Swap from a bigger portion size to a smaller one. For example, order a “small” instead of a “large.”

Lean swaps: Swap from a higher-calorie choice to a healthier choice in the same food group. Choose an orange instead of orange juice, for instance.

Ingenious swaps: Swap foods to foods in another group that contain more nutrients and often less calories, but are similar in taste or appearance. You could, for example, top your salad with roasted chickpeas instead of croutons.

More please swaps: Swap to a bigger — yet lower calorie — portion from a smaller one, such as whole fruit instead of dried fruit.

Whether you’re looking to lose few pounds or simply eat healthier, here are some of my favorite swaps:

Begin your day with a bowl of oatmeal instead of granola.

Not only is oatmeal filling and full of fiber, it’s also lower in calories and added sugar when compared to granola. While a half-cup serving of oats contains just 1 gram of added sugar, many varieties of granola contain upward of 10 grams of added sugar for the same amount.

Oatmeal is a good source of soluble fiber, which helps to reduce cholesterol. The type of fiber in oatmeal, beta glucans, may be particularly beneficial for heart health and for weight control. Oatmeal also contains minerals, including magnesium and potassium, which promote heart health and healthy blood pressure.

Enjoy granola every now and then. But it’s better to enjoy a small amount, as a topping on yogurt, for exaple.

Swap your hamburger for a black bean burger.

Replacing red meat with beans is a simple swap, which is good for your heart as well as your waist. Beans, peas and lentils (also known as pulses) are terrific plant-based protein options and a good source of fiber.

Unlike a hamburger, bean burgers are also low in saturated fat, which may elevate unhealthy cholesterol levels and contribute to heart disease. The recently released 2020-2025 Dietary Guidelines for Americans and the American Heart Association advise we limit our intake of saturated fat.

Aim to get more plant-based protein into your diets on a regular basis. Going meatless on more than just Mondays is good for your waist and your health.

Top your burger with spinach and tomato instead of cheese.

Adding more vegetables to your diet is a surefire way to be healthier — and a little slimmer — without having to eat less. Spinach and other vegetables are rich in vitamins, minerals and fiber — and are also relatively low in calories.

Most of us don’t eat enough vegetables. Whichever ways we can add more vegetables to our diets, the healthier we will be. Salads, soups, toppers on burgers and smoothies are some of the versatile ways to get an assortment of colorful produce into our diets.

Sip on water or sparkling water instead of soda.

Soda is pure sugar without any nutrients. Sugar-sweetened beverages, including soda and sweetened iced tea, are the largest source of added sugar and calories in the American diet. Extensive evidence exists that decreasing your intake of these drinks reduces prevalence of obesity and the chronic diseases that go along with it.

A 12-ounce can of Coca-Cola contains nearly 10 teaspoons of added sugar and 80% of the upper limit advised by the 2020-2025 Dietary Guidelines for Americans. It’s no surprise that soda acquired the name “liquid calories.” And it’s better to eat your calories instead of drinking them.

Swapping soda for water or seltzer saves hundreds of calories. For flavor, add fresh lemon or orange slices, mint leaves or cucumber slices. Many of my clients love this: Throw in a few “fruity” ice cubes; pour your favorite juice into an ice cube tray and freeze for flavored ice cubes.

Make a sandwich with sprouted grain bread instead of white bread.

Grains are not taboo and don’t need to be avoided — even while trying to lose weight. The trick is to eat the right kind of grains. Whole grains are the best choice. They are full of vitamins and minerals, including magnesium and folate, as well as fiber, which keeps you feeling full longer.

Most of us fail to eat enough whole grains and eat too many refined grains, especially over-sized bagels and muffins. At least half of our grains should be whole grains, which include whole-wheat bread and pasta, brown rice, soba noodles, quinoa and oatmeal. I recommend eating those instead of white bread, white rice and white pasta.

Worried about eating too much bread? Top your sandwich with lettuce and tomato instead of the second slice.

Opt for mashed avocado instead of mayonnaise.

Avocado is a healthier fat than mayo and tastes great in tuna or egg salad, on a turkey wrap or a slice of toast.

Avocado is super nutritious and contains a healthy dose of vitamin K, vitamin C, potassium, folate and fiber. It’s also loaded with oleic acid, a monounsaturated fat, which may reduce the risk of heart disease and inflammation.

Avocado’s combination of good fat and fiber can also help you feel full, a winning combination for weight loss. Because it’s high in fat, stick to a quarter of a medium avocado (around ¼ cup). A little bit spreads a long way.

Enjoy spaghetti made with spaghetti squash instead of white pasta.

Not only will you save lots of calories by swapping pasta for spaghetti squash, the squash will also give you a healthy dose of vitamin C, fiber and folate. Even better, you can enjoy a generous portion without having to worry about gaining weight.

For an Italian-style dinner, enjoy spaghetti squash along with roasted eggplant and broccoli with fresh tomato sauce and Parmesan cheese. Zucchini noodles, or “zoodles,” also do the trick. In fact, a half-cup of cooked pasta contains the same number of calories as five cups of zoodles. Perfect for volume eaters.

Snack on kale chips instead of potato chips.

If you’re like me, you enjoy a crunchy snack every now and then. Kale chips hit the spot. Not only are potato chips higher in calories than kale chips, kale provides with you with a dose of good nutrition: antioxidant nutrients vitamins A and C, along with the B vitamin folate and calcium.

Make your own kale chips. A half-pound of kale (around six cups) requires only one tablespoon of oil. And you can experiment with a pinch of salt, Parmesan cheese, cumin powder, tamari or your favorite spices. Drizzle kale with olive oil and spices and toss in a bowl, spread kale on a baking sheet and bake in the oven on 300 degrees for approximately 25 minutes, rotating after 15 minutes.

Order an appetizer portion of pasta instead of a main dish entrée.

When eating out, you can enjoy your favorite pasta (maybe just skip the fettuccine Alfredo) by eating a healthier portion size. Many entrée portions of pasta in a restaurant contain three to four cups of pasta, translating into an entire days’ worth of grains, according to MyPlate recommendations.

Appetizer portions contain around 1.5 cups of pasta, a far more reasonable amount. Look for fresh tomato sauce along with an assortment of your favorite vegetables. I love broccoli rabe and mushrooms. Switching from a main dish to an appetizer portion of pasta can save you at least 300 calories.

Choose grilled salmon instead of beefsteak.

Incorporate more fish into your diet in place of red meat. Grilled salmon, in particular, is high in protein, lower in saturated fat than red meat and rich in heart-healthy omega-3 fatty acids, shown to reduce the risk of heart disease and reduce inflammation. Consuming salmon along with other fish may also help you control your weight and reduce appetite, according to a European study.

For a healthy and delicious meal, grill a salmon filet with olive oil and your favorite spices and enjoy with a side of roasted asparagus and a baked sweet potato.

Snack on grapes instead of raisins.

Grow your fruit intake by switching from a small box (¼ cup) of raisins to a full cup of grapes. I enjoy frozen grapes when I’m in the mood for something sweet. This swap can work for all dried fruit. Instead of dried apricots and figs, switch to the fresh varieties.

If you’re craving dried fruit, it’s OK to eat it every now and then. However, remember that because the water is removed, you’re left with concentrated calories, so a small amount goes a long way.

— Begin your day with a bowl of oatmeal instead of granola.

— Swap your hamburger for a black bean burger.

— Top your burger with spinach and tomato instead of cheese.

— Sip on water or sparkling water instead of soda.

— Make a sandwich with sprouted grain bread instead of white bread.

— Opt for mashed avocado instead of mayonnaise.

— Enjoy spaghetti made with spaghetti squash instead of white pasta.

— Snack on kale chips instead of potato chips.

— Order an appetizer portion of pasta instead of a main dish entrée.

— Choose grilled salmon instead of beefsteak.

— Snack on grapes instead of raisins.

One of the leading experts on portion sizes, Young is the author of “Finally Full, Finally Thin” and “The Portion Teller Plan.” She has also authored numerous peer-reviewed research articles on portion sizes and served as an adviser to the NYC Department of Health and Mental Hygiene on its various portion-control initiatives. Major media outlets, including the New York Times, the Wall Street Journal, Newsweek, CNN, FOX, NBC, ABC and CBS, routinely call on Young as an expert voice on nutrition, wellness, and portion control. She also appeared in the award-winning documentary “Super Size Me.”

Young received her doctorate in nutrition from New York University and her bachelor’s degree in health care administration from the Wharton School of the University of Pennsylvania. The Israel Cancer Research Fund named Young a “Woman of Action.” To learn more about her, visit her website drlisayoung.com where she blogs regularly and inspires her community to make healthy food and lifestyle choices, or connect with her on LinkedIn, Facebook, Twitter or Instagram. 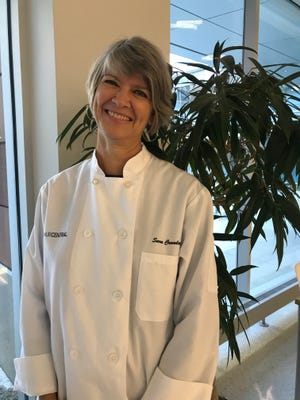